Symposium: “The Future of the Past: Digitizing Cultural Property in an Era of Destruction”

Symposium associated with the exhibition “The Missing: Rebuilding the Past”

and Demonstration of the immersive virtual reality project, Nimrud Rising 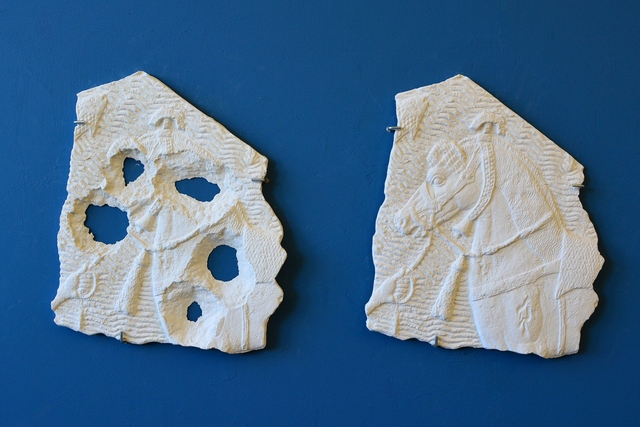 In 2015, ISIS created a number of videos whose elaborate production values and sophisticated release strategy over multiple social media channels contrasted with their brutal content – the destruction of cultural heritage artworks and sites by sledgehammers, bulldozers, and explosives. Yet, the same digital and internet technologies that insurgent groups such as ISIS are using for propaganda, recruitment, funding, and strategizing can also be used to monitor, preserve, and even stop the destruction of cultural heritage.

This symposium offers a roundtable conversation among scholars, artists, and technological pioneers working at the leading edge of digital cultural heritage. They will discuss the promises and perils of new technologies – what will we gain? what might we lose? – as well as explain their visions for the most crucial projects and the most interesting technologies and strategies. Audience participation is expected and encouraged.

On January 22 and 23, we will also present “Nimrud Rising,” an immersive virtual reality project in beta. The Northern Iraqi city of Nimrud was barrel bombed by ISIL in March. This VR project says no to ISIL’s destruction and seeks to resurrect the city, allowing visitors from around the world to visit using VR goggles and learn about its history and heritage. Presented with the Antiquities Coalition and Learning Sites, Inc.

Morehshin Allahyari: Iranian new media artist and art activist who now lives and works in the United States, whose work, Material Speculation: ISIS, a project recently profiled by Vice, is featured in the exhibition. The project uses 3D modeling and 3D printing to reconstruct artifacts from Mosul Museum in Iraq, smashed by ISIS fighters in 2015. Allahyari’s labor-intensive process of digitally sculpting the works using the spare surviving photographic documentation of these objects from a museum that was too under-funded to achieve full photographic inventory documentation of its holdings will ultimately lead to making 3D printable files for the objects available online for use by any interested member of the public.

Peter Herdrich: Co-founder of the Antiquities Coalition, dedicated to the fight against looting and the illicit trade in antiquities, and CEO of Cultural Capital, consulting with business, government, and not-for-profits on communications, media strategy, and production. Herdrich served as the CEO of the Archaeological Institute of America, the world’ largest archaeological organization and as publisher of Archaeology magazine. He is an award-winning television news producer and has produced and written for ABC, CBS, Fox, Disney, USA, and 20th Television.

Donald H. Sanders: President of Learning Sites, Inc., with 19 years of experience creating digitally reconstructed ancient sites for interactive education and research, including the immersive virtual reality “Nimrud Rising” project, the only visualization of the Northwest Palace of King Ashur-nasir-pal II, Nimrud (Assyria, present-day Iraq), destroyed by ISIS in 2015. Parts of this project have been featured in the Metropolitan Museum of Art’s “From Assyria to Iberia” exhibition, and Dr. Sanders will demonstrate the virtual reality experience in the Shiva Gallery to interested visitors on January 23, 2016.

Erin Thompson: faculty member at John Jay College and America’s only full-time professor of art crime. Thompson studies the damage done to humanity’s shared heritage through looting, theft, and the deliberate destruction of art. Currently, she is researching the ways in which terrorist groups both sell and destroy art in order to support their genocidal campaigns. Thompson has discussed art crime topics in The New York Times and on CNN, NPR, Al Jazeera America, and the Freakonomics podcast.

Clement Valla: a Brooklyn-based artist and assistant professor of Graphic Design at the Rhode Island School of Design, whose digital recreations of ancient objects are an Artforum Critics Pick. Valla contributed a work, Wrapped terracotta krater with lid surmounted by a small hydria, to the exhibit, using digital technology to capture a 3D image of a 7th century B.C.E. vase on display at the Metropolitan Museum, producing a sculpture that both carefully reproduces and shatters the original vase.