Clement Valla, a Brooklyn-based artist and assistant professor of Graphic Design at the Rhode Island School of Design, contributed the final artwork for the exhibition, one that marks the transition between its artistic and its scholarly sections. Valla’s work focuses on computer-based picture-producing apparatuses, exploring how they transform representation and ways of seeing. He characterizes the work in this exhibit, wrapped terracotta krater with lid surmounted by a small hydria, as a sculpture that is neither an object nor an image. Valla used digital technology to capture a 3D image of a 7th century B.C.E. vase on display at the Metropolitan Museum of Art. This digital information provided the basis for a flat image which Valla printed and then wrapped around a core to make a work that both carefully reproduces and shatters the original vase. Valla’s sculpture should make us question the reliability of digital reproduction and replication–technologies which are often hailed as saviors for endangered art, but which can depart from perfect capture of the original in sometimes subtle, and sometimes dramatic, ways.

http://clementvalla.com opens in a new window 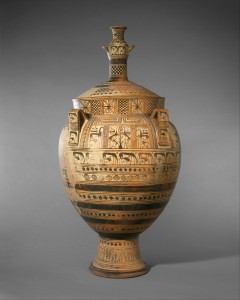