Truth of the Matter

Since the early 20th century, when Duchamp argued for a less ‘retinal’ art there has been a false dichotomy between conceptualism and pure visual expression (as if any of the two, in isolation, were possible). Painting, which is paradigmatic of Western visuality, was a particular target in the 1970s, suffering then and since a number of announced deaths. It was only from the 1990s and on that the discussion on the validity of a medium became obsolete. In the pluralistic environment of postmodernism there is not a unique linear path to be followed, which would accept only one idea at a time. That earlier Modernist construction mirrored classical scientific research where there were exclusive and consecutive contributions, i.e. either the sun or earth could be at the center of the then known celestial bodies. Art now seems to rely more on the assumption of synchronic developments that are not mutually exclusive, and in which each artwork needs to be analyzed in contextual, not universal terms. Despite the fact that extreme relativism brings its own theoretical difficulties, this preamble helps to situate the works in this exhibition as they conciliate their reliance on materiality, particularly paint, and the conceptual issues that ground them. 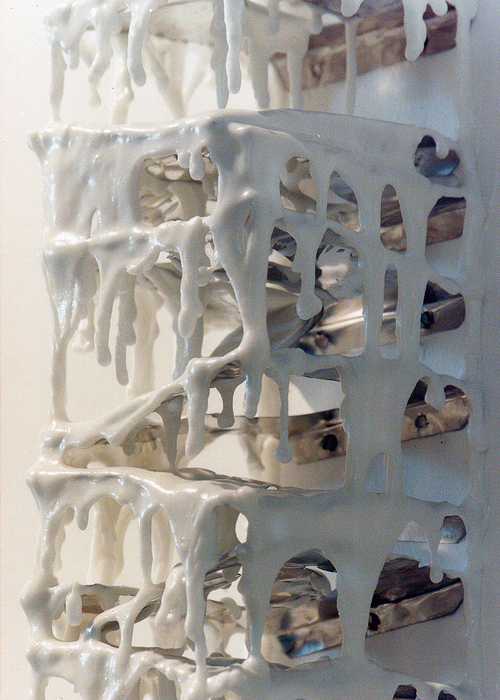 Truth of the Matter reunites three artists that work on a variety of media, including painting. What is particular and interesting about these works is that their very materiality is infused and indissociable from its concept. Their very flesh is their soul. In each case the chosen materials are charged with meaning. They are not merely a choice but rather the result of an extensive process, which is present as a parallel narrative that imbues the images within a larger context. These larger narratives, which haunt but are not visible, as well as the indexicality of the images, are appropriate as this collection of works share a common interest: memory. The pieces are vehicles for memory, but also meditations on it. All three address entropy with melancholy, as the sense of loss is how memory presents itself here. The family photographs that loose meaning so fast, the ecological catastrophe that changes a way of life, the implosion of language into meaningless components. The three artists seem to tentatively hold fragile fluxes that trickle down anyway, inexorably, unjustly.

Luiz Cavalheiros uses bleach to dissolve his personal photographs (Imagens Relembradas, 1999-ongoing). He then uses the resulting liquid (the photo dies dissolved in bleach) as a type of watercolor with which he paints versions of the erased photographs from memory.

Lisa Moren collected water from the Gulf of Mexico at the time of the BP spill, which she then created pigment for her marbleized paper (the range of browns and ochre are an indictment in themselves).

Helena Trindade accumulates layers of paint by dripping it through columns of letter stencils, using paint in a three-dimensional way and alluding to the opacity of language. Her billboards of blank billboards are again a medium for communication that stops short of its function, pure potency. 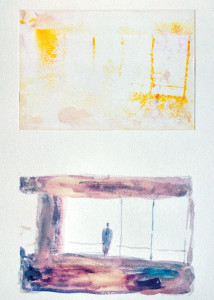 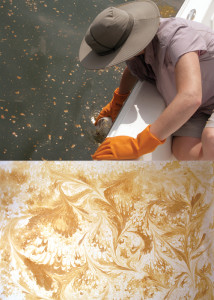