Unlike sexuality that comes from within the individual, gender role is formed through parental, peer, school and social influences. Many of our early views of life come from the first teachers we encounter. Often our first taste of socially held beliefs such as girls look pretty and are passive, while boys do and are active, are provided to us at this early age. It is important for children to develop strong egos in their socialization phase that can withstand peer and social pressure and to continue in creating healthy relationships.

With this exhibition largely comprised of delicately appliqued, sewn, pinned and woven works, we are challenging traditionally assigned sex roles and preconceived notions about what are and are not female or male work practices. Consequently, we hope to dispel traditional gender assignations to the work of these artists working with methods traditionally considered as “women’s work” because they are delicately and painstakingly produced.

Eozen Agopian for example sews her artworks, a task usually attributed to women, yet she seeks to cross the border of art and objecthood by alluding to painting in her fabric works. Renee Magnanti’s patterns serve her as leitmotifs in producing works that are interlaced, crisscrossed, or interwoven like fiber art. She combines ethnic patterns in her effort to help us see the common bond between peoples of different geographic backgrounds. The making of Nicholas Moore’s highly embellished canvasses was greatly impacted through his rearing by parents in the fashion industry. Moore’s mixed media works are encrusted and worked with glittery materials that because of their fragile nature may wrongly be considered feminine in gender stereotyping. Ran Hwang’s work has also been influenced by fashion for it consists of thousands of pinned buttons formulating her subjects that range from Buddhist temples, to spiders and plum blossoms. Hwang partakes of the theory of opposites as in the yin and yang of her native Korean country and because of her background in Buddhist philosophy reflects upon the ephemerality of life. Maria Karametou creates intricate, exquisite and dainty pieces that in their fragility signal what would be popularly taken as feminine embroidery. Karametou’s work is multifaceted, however, and juxtaposes the delicate nature of what might be found in a female’s dowry in Ancient Greece against the cold, metallic, métier with her title’s references to war or conflict.

These five artists were used as examples to break with past models of gender classification embracing the individual aesthetic and unique working method of each show participant. At its core the exhibition questions the idea of ‘women’s work’ by suggesting that it is a social construct perhaps in the service of making the male feel more powerful. It should also take us one step further into de-constructing the traditional stereotypes that in the past have excluded trans-sexuals, and gays.

In conjunction with this exhibition, the celebrated and renowned modern dance icon Sincha Hong (b. 1943-) will be in the United States and present a performance with which to celebrate the opening of this show. Hong lived and worked in the United States from the late 1960s until 1990, founding the Laughing Stone Dance Company in New York City in 1981. She returned to live in South Korea in 1990 collaborating with the gayageum (twelve-string Plucked Zither) player Hwang Byungki. She is considered the first avant-garde dancer in Korea working in a minimalist manner in her bold and minimal short and evening long productions that have been lauded by prestigious magazines and press in Korea and abroad including reviews by the New York Times. 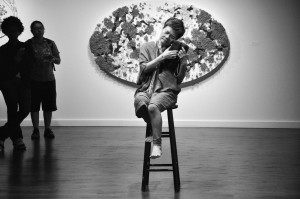 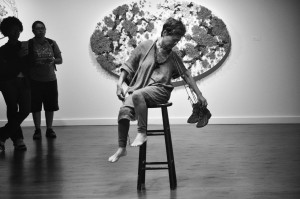 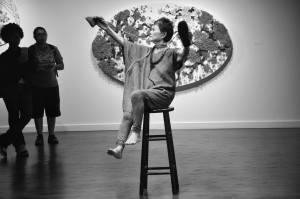 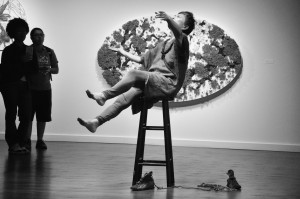