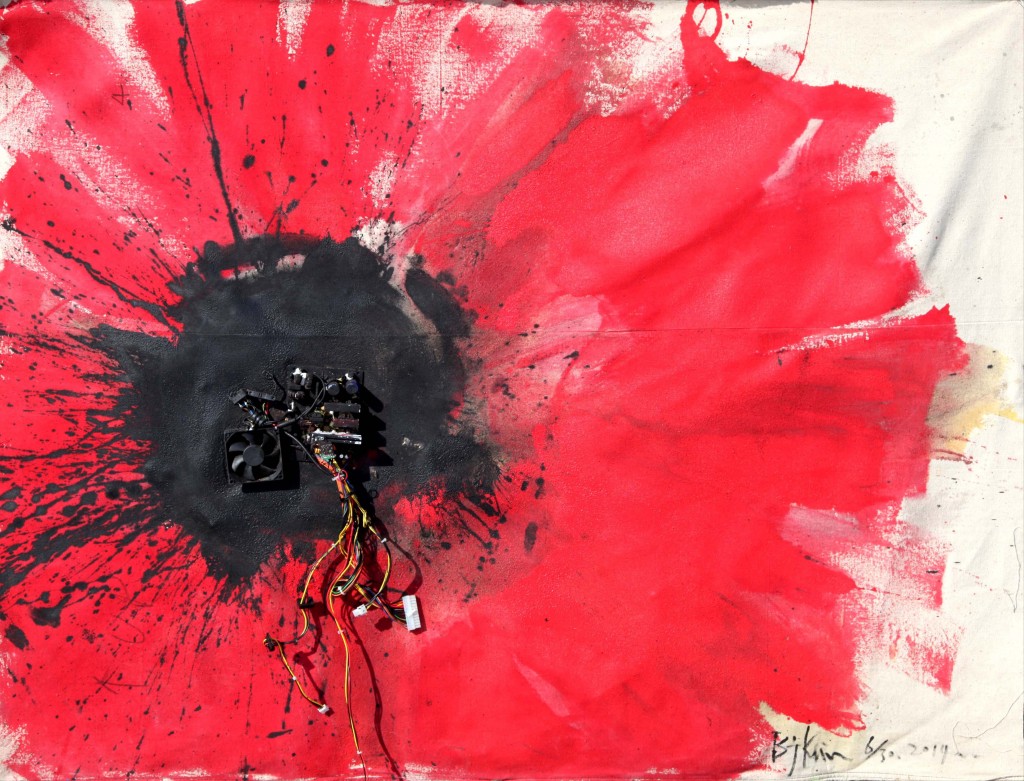 BongJung Kim’s painting installations evidence his interest in the phenomenon of cyber addiction. Internet addiction disorder or IAD, has to do with impulse control that in today’s world is more and more common. Thus, Kim’s interest in depicting IAD stems from his focus of investigation within the arts. Just as many use the internet to help overcome stress, Kim reflects upon it by painting the subject, in itself an obsession. The preoccupation that appears as internet gaming, shopping, or cybersex addictions is very harmful to the individual and the family unit at times leading to financial problems, a lowered production, interaction with family, intimate partners or friends.

With the decentralization inherent in globalism and the split of the family unit, as well as, the provision by internet sources of constantly changing entertainment and information, IAD is an understandable occurrence. Smartphones, laptops, tablets, and other electronic devices, make it easy to be in touch yet many choose anonymous interaction rather than familial.

Kim paints natural forms like flowers, overlain by broken computer parts. The facts that the digital machinery lie on the surface of the painting in key spots broken and dysfunctional, clarify Kim’s feelings about a computerized world. In Kim’s paintings we see the flowers outlined through computer wires while broken pieces of computers dot his backgrounds. His colors are red, black and white and reference the poppy flower that itself produces the addictive substance opium. Kim scatters the broken computer parts over the central part of the poppy pistils as if saying that this is the most dangerous place of the flower from which the opium is distilled. Whereas the body of the flower is red, the pistils are black which Kim chooses to combine with the scattered computer parts.

In his paintings, Kim depicts objects of obsessive desire such as the poppy (Papaver Somniferum) that is a plant of rare beauty and healing powers but also of contraindications. In Kim’s case the poppy is the perfect metaphor for computer addiction but also to connote his own addiction to art. Like all interesting things it has dualistic and multiple characteristics that are both good and bad. Opium for medicinal use has been known to cure insomnia, shock and injury, and to lessen the paralysis from a stroke, as well as to rid the body of tremors or convulsions due to delirium tremens. On the other hand, it can be addictive when taken in excess. This is a similar thing to a computer obsession that can overwhelm the individual making him loose himself within a cyber-world too huge to navigate yet too interesting to leave. But, by bringing our attention to the issue, Kim’s art helps us remain connected to the offline world of culture, participation and experience. It acts like cognitive behavioral therapy in which we are given step by step directions in finding real life support and reconnecting while being comfortable with the real world rather than getting lost in space.

On view from May 10 through June 15, 2016 President’s Gallery BongJung Kim’s painting installations evidence his interest in the phenomenon of cyber addiction. Internet addiction disorder or IAD, has to do with impulse control that in today’s world is more and more common. Thus, Kim’s interest in depicting IAD stems from his focus of END_OF_DOCUMENT_TOKEN_TO_BE_REPLACED