Tomiko Jones was born in the twentieth century to a Japanese American mother from Hawai’i and a Welsh German American father from Pennsylvania. Loose narratives unfold in questionably fictional performative photographs and sculptural video installations. Her work is grounded in discovery and experimentation, immersion in the landscape, collaboration with other artists, and interaction with communities. She teaches and coordinates the photography program at Metropolitan State University of Denver, Colorado and teaches 3D Concepts at the Master of Arts Summer Institute at Drury University, Springfield, Missouri. She has had solo exhibitions throughout the United States: she exhibited at WorkSpace in Nebraska and the Haas Gallery at the University of Pennsylvania in 2013; Groundswell Gallery in Denver and El Paso International Airport in Texas, 2012. She also had site specific installations at Ironton Gallery in Denver, Grunwald Gallery at Indiana University, 2012; Theatre de la Mer, the Camargo Foundation in France and Artopia in Seattle, 2009.

http://www.tomikojonesphoto.com opens in a new window

“The overarching element throughout my work is a relationship to place, a loose mapping of a landscape that echoes the terrain of consciousness. Quiet, yet significant moments are found in the transitional place between land and water. Our bodies too are pulled back and forth with the flow. Water is ever present, shaping my identity as both person and artist. Growing up along the Pacific, it represents my family’s migration passage from Japan to Hawai’i to the West Coast. These images become a visual record of existence, a search for home and belonging, not only in society or culture, but also within oneself.

It’s a winter day, my birthday, and I want nothing more than to visit Rattlesnake Lake. It smells of summer and holds so many memories.  It is January and the drizzle will not let up as the mist rolls in the growing dark.  Here is nothing but a mud puddle, caked earth and a hundred ancient stumps. Once the herald of a happy summer day, this place has a deeper story to tell.  The lake draws me in, and I gravitate back, imaging it in an ongoing series. The boundary between land and lake blurs as the water rises and falls, both revealing and hiding its history.  A figure navigates the landscape, moving among stumps and stagnant water, one of the many ghosts moving through this place. A long and winding history weighs on Rattlesnake Lake – once a site of indigenous people, the slopes were devastated and a logging camp built, later, a flood, and now, it provides drinking water for the city of Seattle.

Rattlesnake Lake is a long-term photographic project in the Cedar River Watershed in Washington State. Earlier images at Rattlesnake Lake were made almost exclusively with Type 55 4×5 Polaroid negatives. I collected water to clear the film, as an invitation of the lake to merge physically into the image. Dirt and leaves and wings of deceased bugs rub together and onto the film, leaving artifacts behind and sometimes tearing small pieces of silver emulsion away. As photographic processes have changed or become extinct, I have adapted my process but the intention remains the same.  In exploring a method of printing, the platinum/palladium, or platinotype, appealed to me as the alchemical mixing of precious metals and careful coating of heavy rag paper is contemplative of the experience of place. The sensitized paper is exposed to an intense ultraviolet light and the developer reveals the image instantly in a moment of photographic magic.” 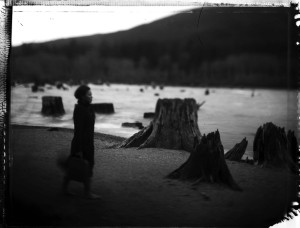 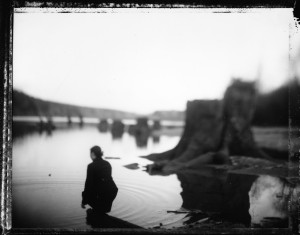 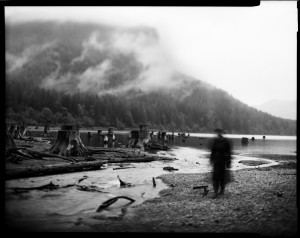