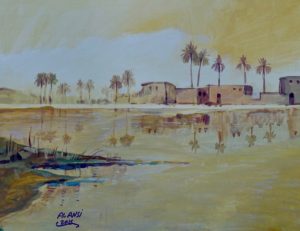 “Untitled (Oasis).”Art work by Muhammad Ansi
Djamel Ameziane arrived at the detention center at Guantánamo Bay shortly after it opened, in early 2002. A citizen of Algeria, he had left his country during its civil war in the early nineties and sought refuge first in Vienna, where he worked as a chef, and then, when his visa expired, in Montreal. After his application for Canadian asylum was denied, Ameziane went to live in Afghanistan. By then, it was 2000. When the United States invaded, the following year, he tried to escape the violence by crossing the border into Pakistan, where he was captured by local bounty hunters and turned over to the American military for five thousand dollars. At Guantánamo, Ameziane was placed in solitary confinement and tortured. He was never charged with a crime; his lawyers insisted that he had been a victim of circumstance. In 2005, he filed a habeas petition. In 2008, he was cleared for release, but where could he go? The U.S. wanted to send him back to Algeria; as a member of the persecuted Berber minority, he feared for his safety there. Five more years passed at Guantánamo as Ameziane’s lawyers fought the American government’s efforts to repatriate him in the country he had fled.

As Ameziane waited for a final decision, he made art. Two of his watercolors are included in “Ode to the Sea: Art from Guantánamo Bay,” a startling exhibit on display through January at the John Jay College of Criminal Justice. The first is a tranquil landscape of mountains and pines ringing a lake with a house on the far shore, reflected in the calm water. It’s the sort of soothing, contemplative image that you might expect to find in the dining room of a country inn, not in a cell of one of the world’s most notorious prisons. Ameziane’s second painting, of a dramatic storm at sea, seems to speak more directly to his distress. Under bruised clouds, a battered sailboat is tossed on dark, frothing waves, about to capsize. The picture put me in mind of those moody, shipwreck-loving Romantics, artists like Claude Joseph Vernet, whose paintings of sea storms revel in pathetic fallacy and the magnificent cruelty of nature’s triumph over man—except for the eerie fact that in Ameziane’s scene, nature has no antagonist, because no people are shown at all. He himself was the ship, he told his lawyers, buffeted by the waves, without a friendly shore in sight.

“Ode to the Sea” includes work by eight Guantánamo detainees, half of whom have been released. The others remain there still. In all the years that they have spent living on the shore of the Caribbean Sea, they have seen the water only once, in 2014, when guards took down the green tarps covering the prison’s fences to prepare for a hurricane. But water is everywhere in the exhibit, as its title implies. A livid sunset over a bridge that looks very much like the Golden Gate was painted by Abdualmalik Abud, a Yemeni held at Guantánamo for fifteen years and released to Montenegro, in 2016. An image of a lighthouse on a craggy, purple shore is by Ghaleb al-Bihani, also from Yemen. He was released to Oman, last January, as was Muhammad Ansi, whose work in the show includes a painting of a lemon-yellow bay with a hazy city just visible in the far background and one of a pink beach, complete with families gathered under sun umbrellas. “Everyone who could draw drew the sea,” Mansoor Adayfi, a former detainee, wrote in a recent Op-Ed in the Times, describing his fellow-prisoners’ rapture when the tarps temporarily came down. “I could see the detainees put their dreams, feelings, hopes and lives in them. I could see some of these drawings were mixtures of hope and pain. That the sea means freedom no one can control or own, freedom for everyone.”

The sea can also mean danger, loss, and separation, or a difficult, uncertain journey, and not all the work in the show is so sanguine. Ansi’s pieces—sixteen, the most of anyone—include a painting of the famous photograph of Alan Kurdi, the three-year-old Syrian child who drowned off the coast of Turkey during his family’s attempt to flee the war, as well as one of the Titanic, still intact and sailing toward its doom, which puzzled me until I learned that Ansi had been shown the James Cameron movie by a female interrogator who was trying to create a rapport with him. (The catalogue notes that he “was entranced by the film, but recognized the attempted manipulation of being shown sexual scenes while sitting beside a woman.”) Erin Thompson, an assistant professor at John Jay and one of the show’s curators, told me that the detainees have to be careful not to show anger in their art lest they compromise their chance for release, though some of the work does toe the line. In one of Ansi’s paintings, a giant, kohl-rimmed eye—his mother’s, he told his lawyer—weeps in the sky, while in another, the Statue of Liberty, painted black, turns her ashen back to the viewer. As in a seascape that shows shark fins slicing through the water, painted by Khalid Qasim, who is still in detention and on a gruelling hunger strike, the symbolism speaks for itself.

“Untitled (Fins in the Ocean).”Art work by Khalid Qasim

With one exception, the detainees represented in the show were allowed to enroll in art classes, where they used National Geographic and other approved magazines for material. (The exception is Ammar al-Baluchi, a high-value detainee and nephew to Khalid Sheikh Mohammad, who is charged with aiding the 9/11 attackers; he served as the basis for the character tortured on a C.I.A. black site in “Zero Dark Thirty.” He painted “Vertigo at Guantánamo,” a cone of swirling, colored dots, to help his lawyers understand the symptoms he experiences as a result of a brain injury that he suffered during interrogation.) The source material explains the detainees’ surprising depiction of American scenes that they have never laid eyes on: picture-postcard landmarks like the Statue of Liberty and the Golden Gate Bridge that might be seen anywhere in the world, but also subtler motifs, like the cacti and desert shrubs of the Southwest. There is an uncanny familiarity, too, in the style of many of the works—that particular aesthetic shared by art students who are growing more comfortable with their materials, learning how to shade and crosshatch, how to use line and color, how to show the way that light bounces off the curve of a glass in a still-life.

The work in the show came to Thompson through the detainees’ lawyers, who have held onto them for safekeeping as their clients waited for release. It is fortunate that they did. A few weeks ago, the government, apparently reminded of the existence of the detainees’ art by press coverage of the show, declared it government property and therefore subject to destruction, a policy that Thompson, in a Times Op-Ed, denounced as petty and cruel.

“I didn’t want to manipulate their work, so I kept asking them through their lawyers, ‘What do you want from displaying your art?’ ” she told me. “And they all kept telling me, ‘We want people to look at our art and recognize that we’re human beings.’ ” It is confounding to try to fathom the lives that these detainees have had, the conditions that they have endured in our name while hidden from our view. Is that fathoming more or less difficult while looking at the pictures that they have made of the ocean, of buildings, of trees and flowers and the moon, ordinary subjects rendered extraordinary by the circumstance of their creation that have, against the odds, washed up on the shore of our city like messages in a bottle? I don’t know, but the sense that I had, at “Ode to the Sea,” was of real contact being made. Art is created for every reason under the sun, but surely the most basic, the most elemental reason of all, is to mark the fact of one’s own existence in the world, to send a sign of it out like a flare so that others might see. 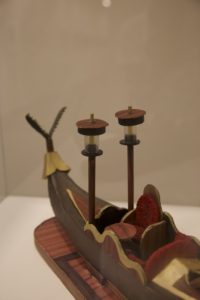 My favorite pieces in “Ode to the Sea” are not paintings but sculptures: model ships made from scavenged materials—trash, essentially—by Moath al-Alwi, who is still in detention. (It seems that his latest project, still in progress, has been confiscated as a result of the government’s new policy.) They are fanciful treasures of ingenuity and imagination, the work of countless careful hours. Al-Alwi made his ships’ sails from old T-shirts and their wheels from bottle caps; their rigging comes from the nets that line Guantánamo-issued prayer caps. On the basis of a picture, he constructed a Venetian gondola with painted sponges for seats and lanterns whose glass is the plastic cover of a shaving razor. There is something magical about these ships, built in captivity, which have now improbably come to dock on Tenth Avenue. Their prows are all graced with cardboard eagles’ wings, like the ones on Hermes’ sandals, speeding them ahead on their unfinished journeys.