Monolith, 2017.”Politicizing Space,” curated by Charlotta Kotik, took as its premise the fact that space can be made political by manmade interventions and used to control human movement and behavior. Kotik emphasized the need to understand how this stratagem works in light of Trump administration policies such as the Mexican border wall. The 11 artists in the show addressed the subject through both figurative and abstract works, underscoring Kotik’s assertion that even nonobjective imagery can be used to direct or restrict people. Carin Riley’s Caryatid I (2017) is a complex, seemingly abstract rendering of the female figures that support Greek architecture. For Kotik, the image implies how women in ancient Greece could be seen as both sources of strength and objects of suppression….see the entire review in the print version of January/February’s Sculpture magazine. 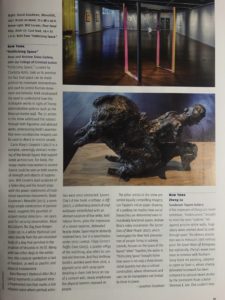