M. Isabel Baraona graduated in Painting at La Cambre, Brussels, in 2002. Baraona has been lecturing at ESAD.CR (Portugal), since 2003. She has exhibited her work since 2001, participating in several solo and group shows in Belgium, Portugal, Norway and South Korea. In 2011 obtained a PHD with the research Self-portrait and Self-representation, a Change of Paradigm in the 20th century, in UPValência, Spain. In 2013 Baraona receives a scholarship from Rennes 2 University (France) to develop a research on artists’ books: www.tipo.pt. In the same year, Baraona was invited to participate in a residency at Columbia College in Chicago, to produce the contents for the Journal of Artists’ Books #35. www.isabelbaraona.com

“Drawing and artists books are the core of my work. Drawing is continuously a surprising experience. We inherited from the Classic culture a lineage of feral female tragic characters. Although today almost forgotten, Antigona, Medea, Cassandra, defied the patriarchal law and endured the consequences. These are women who were never tamed by their own fears neither by their father, older brother, husband, priest, etc. In my work women’s bodies are far from being perfect. Often heavy for being chubby or for wearing voluminous and odd dresses; female characters carry burdens (wool, organs and guts), their heads are swirls and their bodies are flayed. There is a strong association between the ink blotches and unconscious thoughts. I am interested in the transformation of the body (the supernatural ability to transform when aggressed, as Daphne attacked by Apollo) and the role of the older female characters (those who have power and/or wisdom) in Classical mythology and Fairy Tales.“ 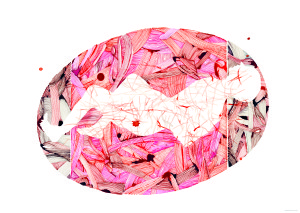 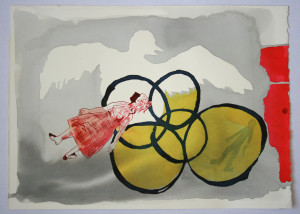 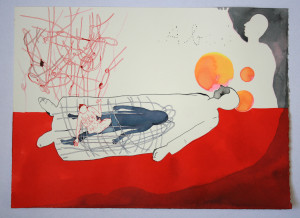