Jan Banning is a Dutch artist and photographer, born from Dutch East Indies parents. He studied social and economic history. Both these facts have strongly influenced his work, e.g. the choice of subjects and his intellectual approach. His projects often concern themes that have been neglected within the arts and are difficult to portray. Sometimes he uses a comparative approach, as in his acclaimed Bureaucratics, a study of government bureaucracies in eight countries; or in Law&Order, comparing criminal justice in four countries. In close-up portrait series such as (Indonesian) Comfort WomenandTraces of War: Survivors of the Burma and Sumatra Railways, he delves into long-term war consequences;in‘ Down and Out in the South, he focuses on the psychological impact of homelessness.Among Banning’ s many awards is a World Press Photo Award. His work has been widely published in books and magazines and is in collections such as the High Museum of Art Atlanta, the Museum of Fine Arts Houston, and the Rijksmuseum Amsterdam. 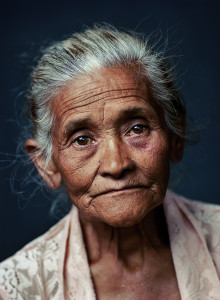 Paini, 1930, Getasan, Central Java From age 13, Paini performed forced labor at a local barracks. First she had to gather food with a group of servicemen in the surrounding villages, later she dug ditches and worked in the kitchen. In the evening, after work, she was taken from home to the barracks and raped repeatedly. Her older sister also was forced into prostitution, at another location nearby. A second arranged marriage, with an old widower, failed after only five months. After that, she worked for a while as a maid before she started a family with her third husband. ÒI told him that I had been Ôused,Õ but he liked me anyway. We experienced a lot of joy together. ThatÕs why I have a lot of children now and grandchildren.Ó 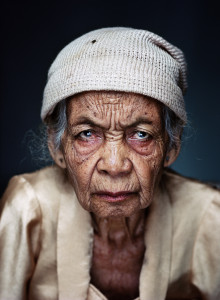 Wainem, 1925, Mojogedang, Central Java Wainem was taken from home and forced into prostitution, first in Solo for a year and then for two years in Yogyakarta. During the day in a warehouse, she had to weave mats with other women and cook her own food. Sometimes she was raped right then and there, but most of the time was taken by soldiers to their rooms in the barracks compound. "An Indonesian doctor tested us every week for pregnancy while a Japanese doctor observed. I never became pregnant then. After the war, with a group of women, she walked some 60 miles to get home. Our people chased off the Japanese with bamboo spears. They confiscated everything: our rice, our money, our gold. When at night the air-raid sirens sounded and we had to hide, the Japanese entered our homes and emptied them." She would rather not be reminded of what happened in that warehouse. "It's been so long ago. My son, who wasn't born then, already has grandchildren now."