Assenting Voices: Agitprop Art from North Korea is of seminal importance being one of a few exhibitions of its kind in the west to show formerly inaccessible North Korean art. The paintings and posters in this show feature celebrations of the North Korean regime and its Juche (Self-Reliance) philosophy. Consequently, and because of the morphological and political similarity of the works it is up to the viewer to surpass what is obvious to discern the underlying message. When the Korean art scholar Jane Portal recently visited an exhibition of North Korean Art in Vienna, she asserted “we’ve seen it all in terms of totalitarian societies.” “But” she continued, “this is the last bastion of this kind of thinking that’s bound to disappear. That’s why it’s so important for it to be seen and collected for posterity.”

The depiction of didactic subjects containing pageants, smiling children, hymn-singing youths, street and domestic scenes, upbeat girls and marching men are typical subjects of artists trained in North Korea in propaganda art defined by the government’s needs. This type of vernacular art as was also the case in the Soviet Union remains the paradigm for Socialist Realism in North Korea. In its dramatic, monumental scaled, message-laden tenor this art is meant to arouse comradery firing up as it does nationalistic fervor for the ultimate purpose of the Korean reunification, to maintain order and loyalty to the government and to the revolutionary struggle, and to show the superiority and independence of North Koreans. Cultural expression is part of everyday life and Art Propaganda squads go to the provinces to cheer on workers with songs and poetry and to congratulate them for their creativity as well as to inspire them towards ever greater successes especially during so called ‘speed battles’ meant to increase production. Out of context, these same posters and paintings become critical realism that puns and ironizes the content. Moreover, by their very presence these images address the absence that is South Korea, or the North’s other half along with the national trauma of separation and alienation. These depictions of relentlessly smiling citizens would be seen as grotesqueries in the west, masking the impossibly traumatizing circumstances under which they were created. On the other hand, for a North Korean artist any kind of individualism or veering from the afforded formulas of depiction is taken as capitalist decadence and harshly dealt with. Thus art functions as formula sometimes including the depiction of South Koreans as puppets appearing very small size-wise or shown while in flight from a North Korean attack, or North Korean soldiers stepping on the American flag, and carrying political slogans such as “We will defend our homeland to the last”. Consequently, this sort of art plays a social role and is typified in its representational models. 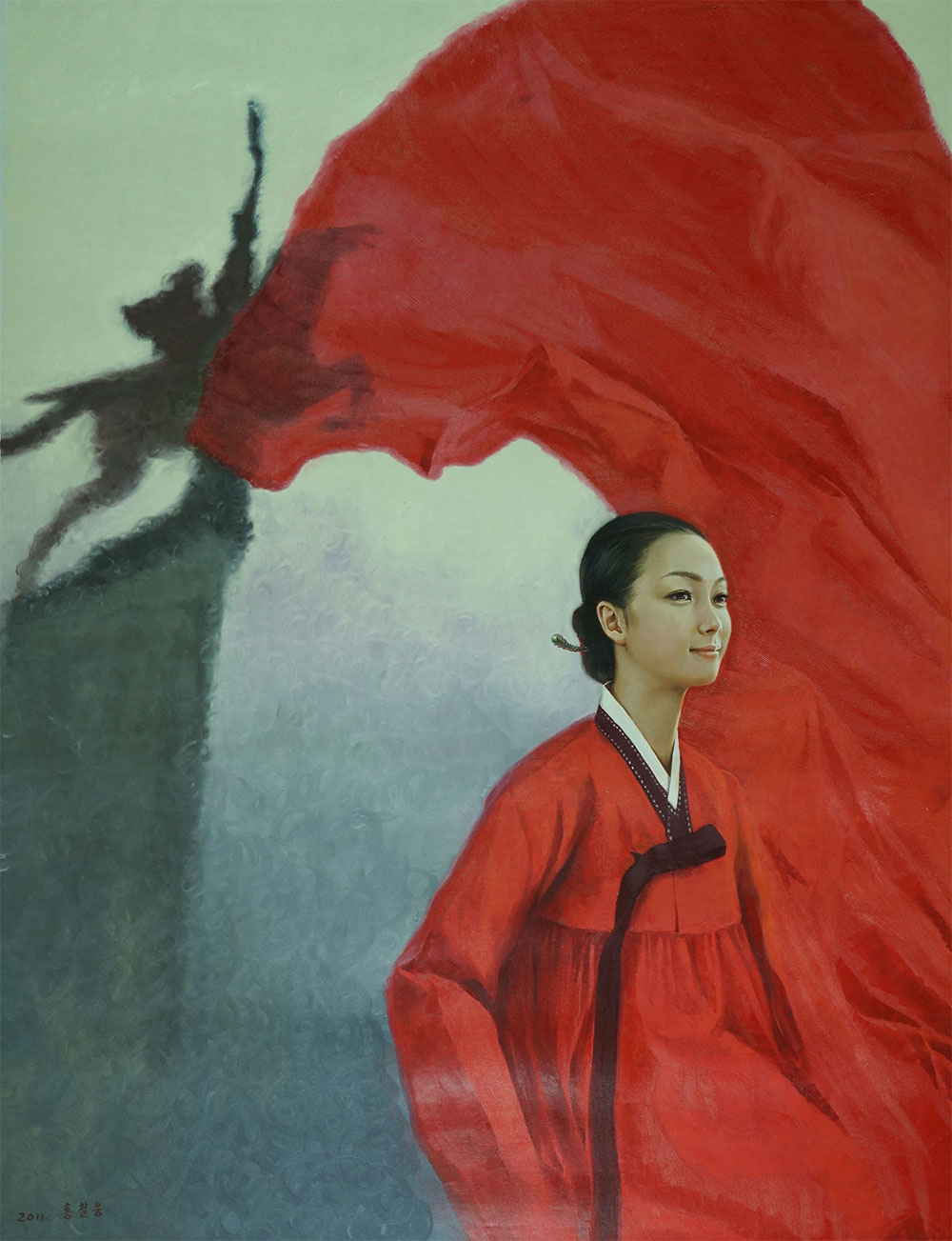 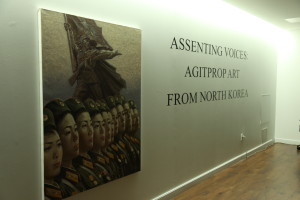 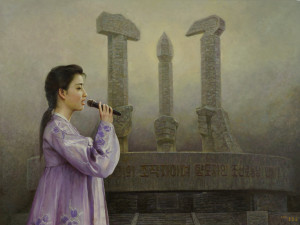 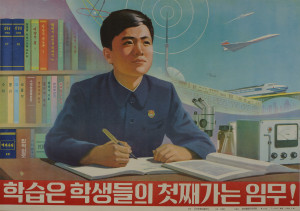 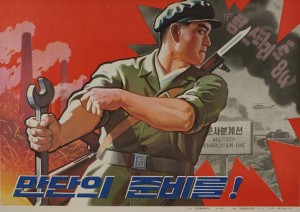 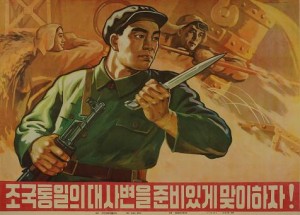 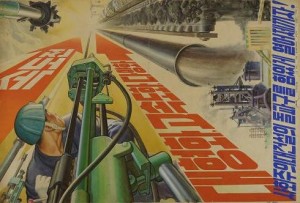 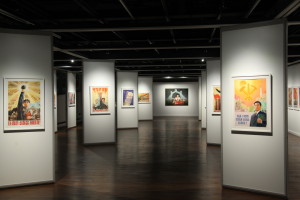 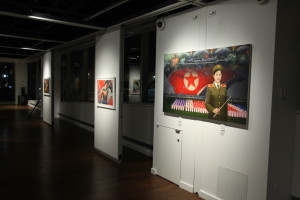 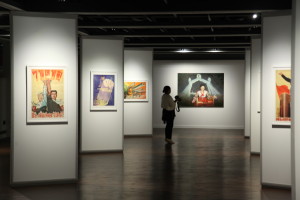 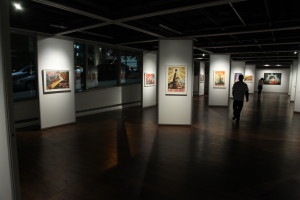 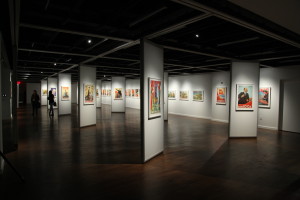 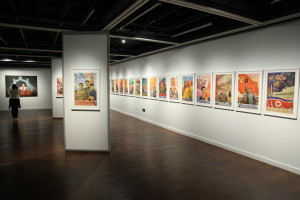 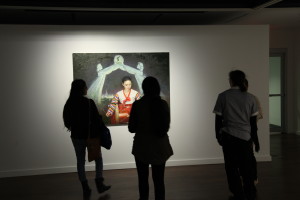 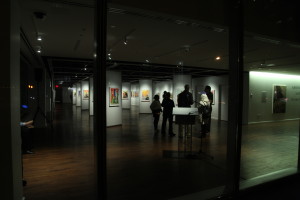 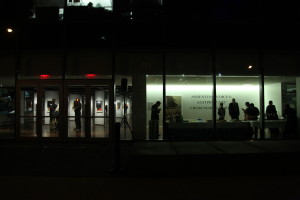 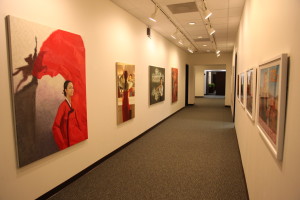 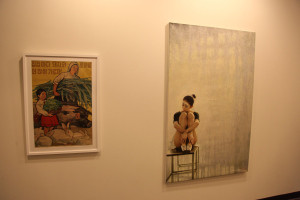 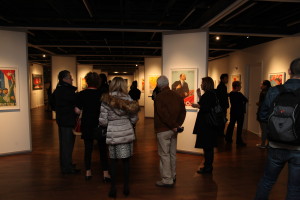 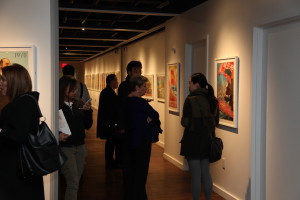 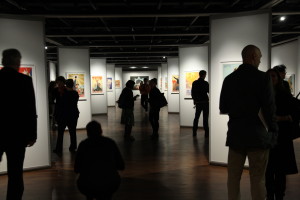 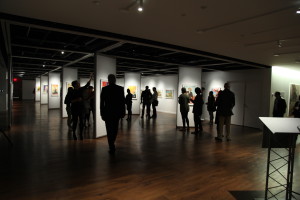