Curated by Dr. Thalia Vrachopoulos, Assenting Voices presents twelve oil paintings on canvas and thirteen posters by North Korean print-making collectives. Two “Social Realist” style posters were created as early as 1956 and 1960, but the majority of them were produced in the 1970s and early 1980s. Posters by seven artists, working mostly with the Chosun Labour Party Publisher and Pyongyang Total Print Factory, are included. The carefully rendered contemporary oil paintings, dated 2011 and 2012, present idealized images that portray scenes of young woman in a variety of life pursuits.

Beautiful girls are seen wearing traditional robes, at ballet practice, in a museum viewing a painting, and standing at attention with other pretty women for military inspection. They are depicted applying make-up, walking through fall foliage, and performing with musical instruments. North Korean females evidently play a wide and varied role in society; they seem especially to be urged to maintain their appearance. The carefully wrought posters function strictly as propaganda organs designed by state collectives, but the stunning oil paintings by Cheol-Ung Hong, Hun Kim, Jeong Hyeok Kim and ChunBum Lim, featuring females in both public and private pursuits, fulfill a more subtle purpose. All the works sustain the belief that persuasion achieved with visual imagery is an efficacious tool to marshal energy and morale.

The message posters furnish models of attractive, industrious people pursuing the occupations they are compelled to perform. Although the unambiguous images may seem simplistic to Western eyes, they are actually more cunningly effective than violence in achieving state objectives. When governments intend their countries to progress from an impoverished agrarian economy into the 21st or even the 20th century, they typically employ the most efficacious means in their arsenal. While horrific conditions can and do exist, the presentation of posters with positive portrayals of comrades toiling in tandem at their goals is an astute approach. It discloses psychological insight into the workings of the human mind. Humankind thrives on positive images of itself. Clear visualizations of comrades focused on specific aims, partnered with written objectives, are among the techniques used for manifesting one’s goals. Similar strategies are outlined in scores of contemporary New Age self-improvement guides. North Korean mass manipulation skills are actually on target.

It is tragic that personal freedom is so curtailed. The latitude to probe life’s myriad pleasures and personal occupations is subsumed in ambitious efforts to play catch up with the West. The fact that poetry, art, music, performance, and gymnastics are woven into the fabric of life displays a skillful use of manipulation. It channels creativity to relieve monotony, regimentation, and sheer exhaustion. Think of Mao’s Little Red Book of revolutionary quotations; it was a virtual Bible in China.

As the Russian scientist Pavlov discovered in his famous experiments with dogs, and later with humans, most creatures respond to positive reinforcement. Positive reinforcement strengthens the desired behavior; negative reinforcement presumably extinguishes it. As when parents teach children, the assenting propaganda is meant to reinforce positive attitudes and behavior. One-dimensional posters are honed to a specific purpose, such as a good-looking student at his studies, or a group of clean, attractive workers cooperating on jobs in a factory. The message, not unlike a Catholic children’s prayer book or Western advertising, instills mores and values. The population fails to learn to think critically; all its energies are expended in labor campaigns to improve conditions vis-a-vis the West. “Art Propaganda” gangs are sent to cheer provincial workers in “speed battles,” to inspire greater output. Posters and paintings depict unanimous support for societal objectives. They display celebrations, parades and group activities to encourage self-reliance or “Juche”; crowd mentality has its own innate power to persuade. Human dignity is highlighted in dramatic images of loyalty and camaraderie that encourage nationalistic sentiments designed to foster reunification, on their terms.

Artists are trained as propagandists to create strong images designed solely to instill a sense of pride and loyalty to the state, its aims and values. Even comrades intent on raising foreign currency are depicted in relatively clear imagery accompanied by an explanatory slogan, “Let’s make a national campaign to earn foreign currency!” Text slogans are included in the picture formats in order to clarify and reinforce the message. Strong warm hues make the pictures unconsciously more desirable. The posters hint at advertising, with the text merged with the motif.

The familiar values of feminine youth, beauty and cultural attainment are spurred in works painted in a realistic figurative Western fine art tradition. They are beautifully rendered and fully realized, yet many of the themes are state-dictated. The oil paintings present idealized portraits of beautiful young women applying make-up, in perfor-mances, or walking outdoors in traditional dress amongst colorful autumn foliage. Traditional values regarding womanhood are affirmed, yet women are not expected to stay at home; they appear to be expected to excel in the arts, to make the grade in the military or on a job, too.

For Westerners, the “Social Realist” posters may possibly inspire scorn or irony, but they have effectively achieved their function. Individual rights come at too high a cost. Positive messages must hold sway; past traumas should be forgotten. The artist in North Korea plays an entirely different role in society than does the Western-based artist. The skills of the artist are reserved primarily for state supplied subjects, themes and motifs. Political dissent is not tolerated in art or in any other form. – Mary Hrbacek

Shown: HwanKi Ryu: “Have a happy mind for good harvest and do the best and solid work for autumn harvesting!” (1973)

Mary Hrbacek has been writing reviews of NY art exhibitions since 1999; she has covered shows in almost every museum in town. 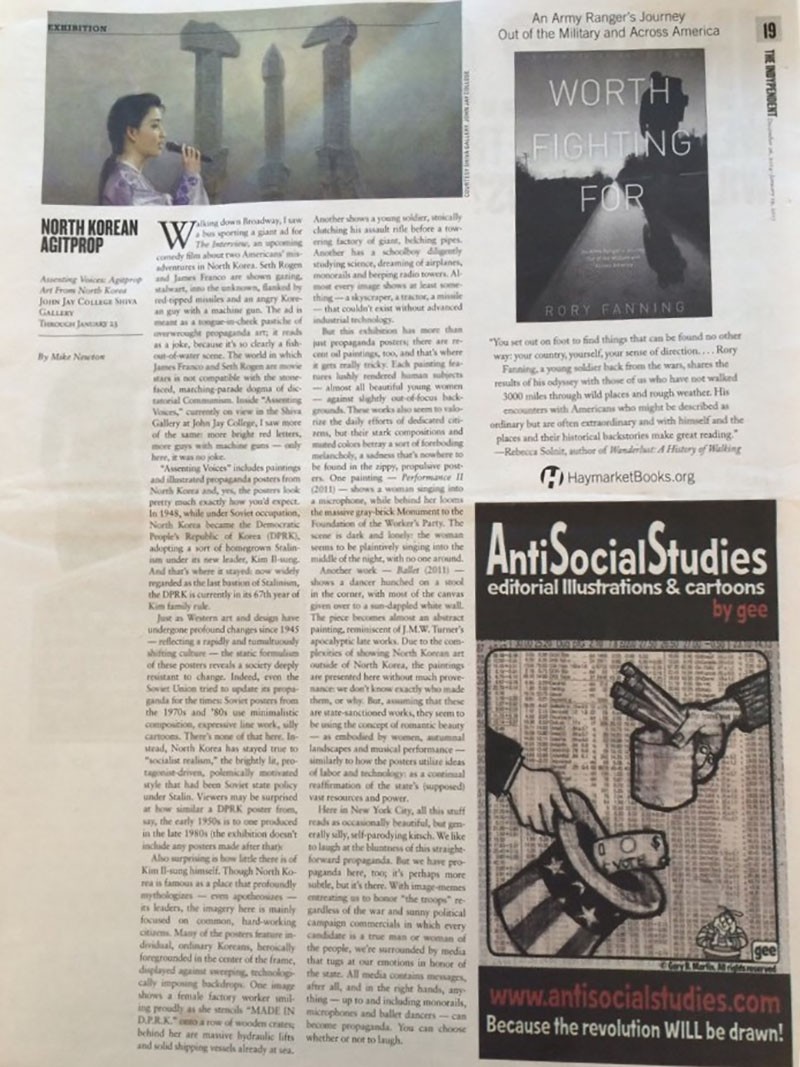