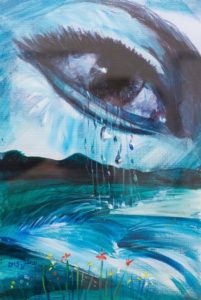 A painting by Muhammad Ahmad Abdallah al Ansi, a former prisoner at Guantánamo Bay, is part of an exhibit in New York of artwork by men who have been held at the prison. Credit Joshua Bright for The New York Times

The American prison at Guantánamo Bay, Cuba — where men suspected of terrorism are for the most part being held indefinitely without trial — has long been a stain on this country’s human rights record. Now the military has stumbled needlessly into a controversy over, of all things, art.

The Pentagon allowed its nose to be knocked out of joint by a free exhibition in Manhattan: a display of 36 paintings, drawings and sculptures that eight Guantánamo prisoners produced in the last few years.

Since early October, these works have lined walls outside the office of the president of John Jay College of Criminal Justice. “Ode to the Sea,” they are collectively titled, and appropriately so, given that most of them have river and ocean themes. The exhibition is scheduled to continue deep into January.

Erin Thompson, a curator of the exhibition and a John Jay professor of art crime, said she had been contacted by a lawyer for one of the prisoners and asked if she wished to show the artwork. Her reaction, Ms. Thompson recalled was: “What are you talking about? There’s art from Guantánamo?”

Indeed there is. Art classes have been held there for at least eight years, if only to give prisoners something to do and perhaps reduce tensions with their jailers and among themselves. The paintings are unthreatening, having been vetted for hidden messages and inflammatory political statements. Elaborate ship models made by a Yemeni man out of cardboard and glue-stiffened cloth were X-rayed to ensure they contained nothing untoward. Their sails are stamped, “Approved by U.S. Forces.”

Prisoners were permitted to give their works to their lawyers, sometimes as thank you gifts. But now the Pentagon says that, while the art instruction will continue, any new creations will go nowhere. They will stay at Guantánamo, a spokesman said, and “remain the property of the U.S. government” (even though some materials were supplied by detainees’ lawyers, not the military).

There has been no claim of a security breach or risk to Americans. The military, it would seem, is simply unsettled by the attention that the John Jay exhibition has drawn from news organizations. It may also be annoyed that some paintings are for sale — not by the college but by a few of the artists and their representatives. Of the eight men, only four are still detained, three of them without any formal charges having yet been brought; they are among 41 men still being held at Guantánamo. The other four artists have been cleared and released, and thus are free to do as they wish, including sell their work.

Ramzi Kassem, a law professor at the City University of New York who represents three detainees, said it isn’t “the art exhibit per se” that offends the Pentagon. “It’s that prisoners take control of their own narrative,” he said, describing the new policy as “a kneejerk ‘let’s stomp it out’ approach.”

An inevitable question is whether unseen art is, in fact, art. For Ms. Thompson, there’s another consideration. “We spend years trying to get inside their minds,” she said of the prisoners, adding that the art is one way for interrogators to gain possible insights. And the viewing American public reasonably gets a peek behind the curtain that has long enveloped Guantánamo.

She added, “Why cut off the information?”