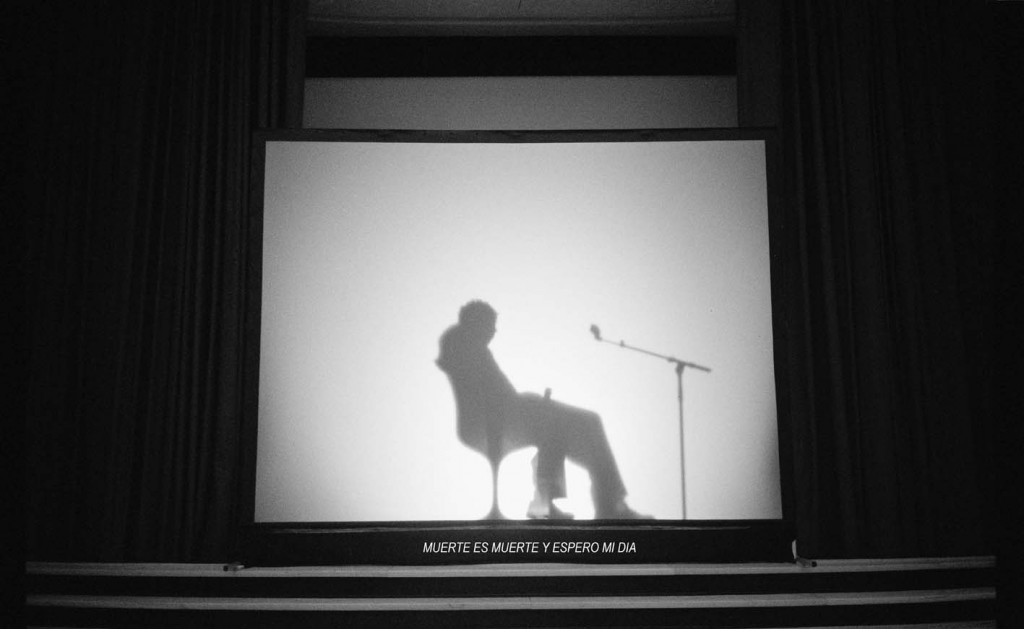 Aníbal López (A1-53167) was born in 1964 in Guatemala, where he currently lived and worked until 2014 when he passed away. He was invited to participate in dOCUMENTA (13), Kassel. Lopez also had a solo exhibition at the Centro Cultural de España in Guatemala City (2011) and put on numerous performances over the years. Some of his international group exhibitions include the Bienal de Pontevedra (2010), the biennale in Porto Allegre (2007), the Prague Biennale (2003) and the Venice Biennale (2001), where he was awarded the Golden Lion as Best Young Artist.

His work consists in proposing to people a way of thinking that with plans or without them could unveil doubts or solutions. He opens a discourse where people could discuss themes that could help solve lives as a community. His work questions and examines the world with projections to the future, where armed conflicts are kids’ toys, for children that have faith in living and not in hating (to live without hate). Without forgetting to judge the ones who have brought us to these poverty conditions and misinformation. He did not consider himself a conceptual or minimalist, but utilitarian of these mediums, as a precise way of approaching concrete subjects without much paraphernalia.

The project “Testimonio” by Anibal Lopez presented at dOCUMENTA (13) – Kassel, 2012 – consists in the complex and delicate attempt to shed light on the reality of Guatemala through the experience of a professional assassin. The artist, in fact, has built a sort of “conference” open to the public of dOCUMENTA (13) where it was free to direct any questions to the young Guatemalan who gave himself, for a fee, through the mediation of the same artist, to be interviewed on condition of anonymity. The performance was presented to Standehause of Kassel, a conference room, with a stage and an audience. The young man from Guatemala, a professional hit man, sitting behind a white panel which was only a glimpse of his shadow, so he started to present himself and then indulge the audience’s questions, with a pair of earphones that simultaneously translated from Spanish to English and vice versa.

The assassin has therefore started to tell his story, where he came from, his profession, giving general information about the context of the country he came from, Guatemala, a country with a high rate of corruption and crime, and without a substantial democracy. Questions from the audience were then succeeded at a later time, at which a great interest has been unleashed on the job and on the young person’s life. The questions raised were: why do you do this? How much you make? Who are the instigators of the murders? How do you feel when you kill someone? How was your first time? Are you afraid of the work you do? What is its impact on your family? What prompted you to practice this profession? The overall framework outlined by the assassin was to a lifestyle marked by violence, in a country where killing is simply a way to earn their living, a job which is not socially condemned, which was forced due to the conditions of a highly precarious life. In this sense, it was found a certain superficiality and lightness with which the assassin spoke of his work, which has urged the public to more further questions.

It is therefore created an atmosphere of great curiosity at times morbid that brought the killer to answer every question, always leaving the audience in a state of perpetual externalization so that was suggested by the same public that the assassin was an actor and his performance was based on an imaginary experience. On the other hand the purpose of the performance was not to demonstrate the reality or the fiction of a life experience, his power lies, in fact, the same ability to have this doubt insinuated into the public. A stunned audience at the same time curious, which has established with the assassin a relationship of immediate feeback, where the visions of the world, the ways of thinking and individual life experiences of one or the other approach each other and collide. Two opposite worlds, that of the audience with a German majority of experts in the art world has faced and approached to the experience of life characterized, from a European perspective, the absurdity, a rampant violence and unscrupulous, incomprehensible and therefore a source of many question marks.