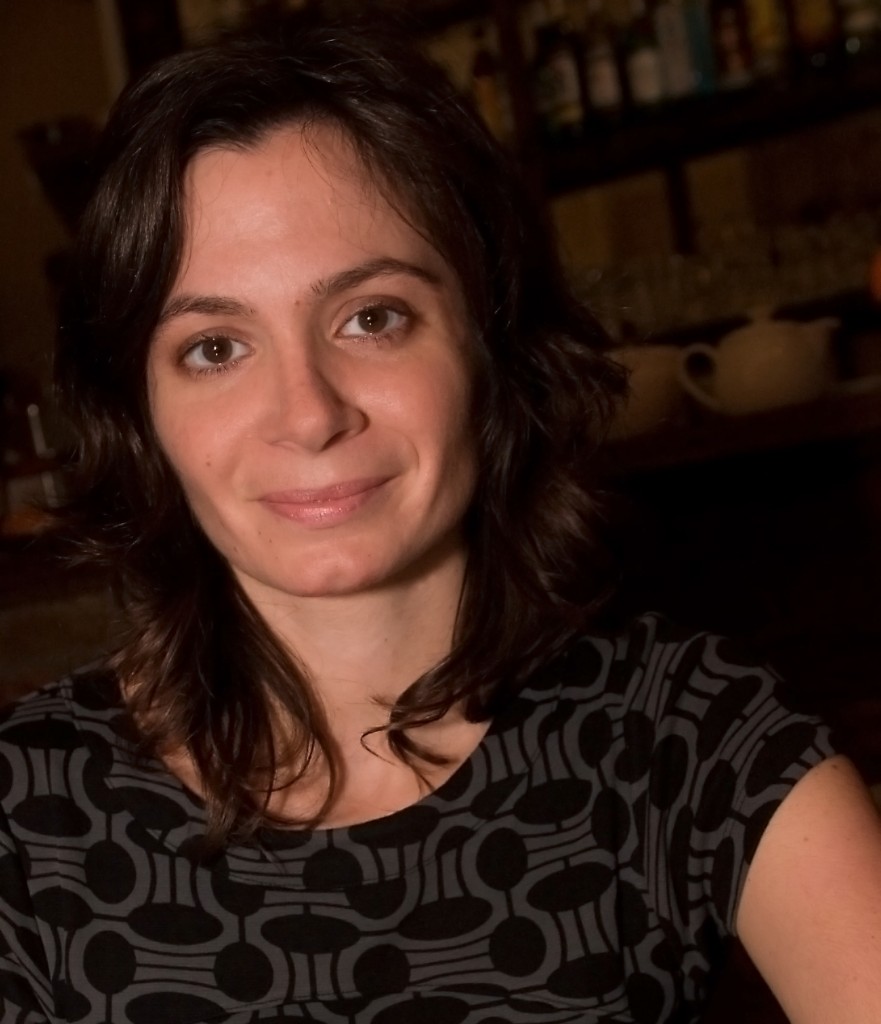 Alice Miceli is a Brazilian artist, born and raised in Rio de Janeiro, currently based in Berlin. Using tools famous for being time-based—video and still camera—Alice Miceli produces evocative videos and photographs focused on time and the way it is expressed mathematically, philosophically, in history, and in the body itself. She experiments with time, manipulating the duration of moving images, based on mathematical formulas, so that, for example, she shows sprinters caught in a perpetual present, racing to a finish line that never arrives. In Projeto Chernobyl (2007-09), her best-known and most ambitious project to date, included in the 29th Bienal de São Paulo (2010), Miceli embarked upon an exploration of how history bleeds into the present. Armed with a pinhole camera loaded with film sensitive only to gamma radiation, she roamed the Chernobyl exclusion zone, recording the enduring effects of the 1986 nuclear disaster on the contemporary landscape.

Her exhibition record includes the São Paulo Biennale, Nara Roesler Gallery in Sao Paulo, and Max Protetch Gallery in New York. Her work has been widely shown at festivals, including the Japan Media Arts festival in Tokyo, the TRANSITIO_MX festival in Mexico City, and several appearances at the transmediale festival, in Berlin, among others. Fellowship awards include The MacDowell Colony, Bogliasco, Bemis, Djerassi, and the Dora Maar House. An extended conversation with the artist has been published by the Skull Sessions, in New York. Alice is the recipient of the 2014 PIPA Prize, Rio de Janeiro, and the 2015 Cisneros Fontanals Art Foundation Grants & Commissions Award, Miami. Alice is represented by Nara Roesler Gallery, in Brazil.

About project: How do we cling to, arrange, and find coherence in a world of disparate and variable phenomena? Looking particularly into the problematic space of minefields, how do we hold ourselves together? From which vantage point?

Landmines are residual of war, weapons placed to kill and maim, which continue to be dangerous even decades after a conflict has ended. They are remainders of a cruel logic that is indifferent to the lived experience of a place. Often used as a tool in the function of territorial acquisition, there are an estimated one hundred million mines scattered around seventy countries. Every two hours someone is either killed or injured by one. In some regions of Cambodia or Angola, for instance, mines outnumber people, quietly transforming entire landscapes into everlasting impenetrable spaces.

Unlike untarnished remote terrains, what is in these fields is not solitary in the usual sense; whatever is out there has been abandoned, shut off, and is no longer meant to be seen. However, might there be other vantage points from which to look? As if against the remnants of an order meant to occupy territory, there might be some sort of counter-alignment that is possible – a way to look at, inhabit and re-claim these long forgotten, negatively occupied stretches of land?

If photography can be an instant that creates a voluntary memory, a mine that explodes is the reverse: an instant that annihilates, death in the age of its mechanical reproduction. This research explores, thus, issues of vantage point and perspective (historical, spatial, imagetic) through the photographic medium’s intrinsic physical and optical constituents. It looks into how the parameters that shape an image’s perspective and depth-of-field inform the physical position and motion of the photographer in the out-of-frame, at the time and place of the exposure, as the means to penetrate these spaces where “position”, i.e. where one steps, is most crucial.

The first series of images from this research depicts a minefield in a countryside of the Battambang Province, in Cambodia. It evolves in eleven successive shots going across the field. The focal length of a lens determines its angle of view, and thus how much the real-life subject will be magnified on the camera sensor for a given position. I calculated all focal lengths needed to keep a constant magnification size for the tree in the image, relational to every inch on the ground, aligned on the same axis. Crossing this pool of hypothetical vantage points with the actual mine-contamination map for that particular site resulted in eleven positions in which it was safe to step. Hence, for this angle of view, these are the only eleven possible shots.

This is a photographic series that includes, by means of its structure, the excluded space. It contains both the action of going across the minefield and the visual result stemming from this sequence of vantage points; respectively, the proposition of a performative movement (that of my own body off-screen) and an exploration of what penetrating such spaces means for theimage. Each photograph denotes a step further into the physical depth of the field; a movement that is, in its turn, translated into the image’s own perspective, creating a visual narrative with which to experience this trek across the topography of a land where space, positioning and movement lay interconnected, embedded in the images.

I worked in collaboration with the Cambodian Mine Action Centre and Victim Assistance Authority, the governmental organization in Cambodia that is in charge of the national demining program.

The second series from the research looks into mine contamination in Colombia. I travelled to affected areas in Antioquia, around Medellin, to regions once dominated by the FARC, who would mine sites as a defense mechanism against the army. Systematic identification of explosives has yet to be completed. As a result, the marking that has been applied is literally in the land: that is what the red sticks we see in the images stand for. Like the lone tree in Cambodia, the central red stick was my guide as I gradually advanced into the mined area in the jungle. The next development will look into mined sites in Europe located in Bosnia – a legacy of the armed conflict associated with the break-up of former Yugoslavia in the early 1990s.

Courtesy of the artist and Galeria Nara Roesler 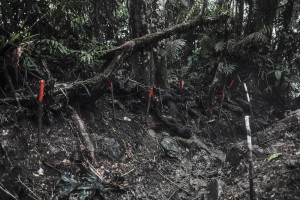 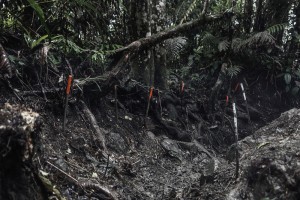 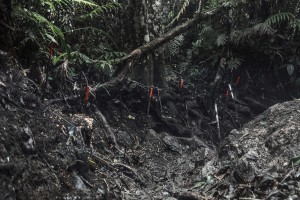 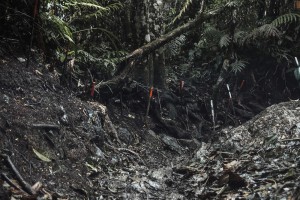 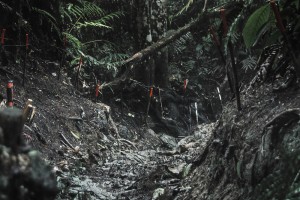 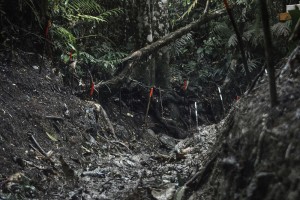 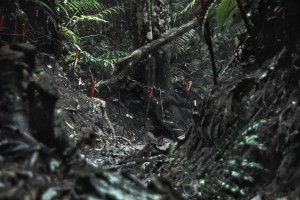